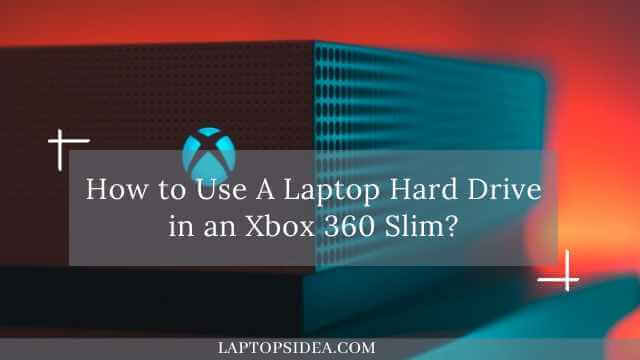 When we talk about Xbox players,they can’t live without their favorite games. Is low storage stopping you from using your Xbox 360? Do you ponder how to use a laptop hard drive in an Xbox 360 slim every time you see your laptop’s free storage?

Behold my fellow geeks because I have found the magical solution. Some ways allow you to use your laptop’s hard drive in your Xbox. But are they all easy?

With the right guidance and tips, they are. So, dust your tool kit and fetch your laptop. It’s showtime!

How to Use A Laptop Hard Drive in an Xbox 360 Slim?- The First Method:

For customizing storage, there are two methods at play; the cleaner and the messier one.  I don’t mean you will see legit bugs jumping out. It will be a bit fiddly though.

Firstly, you need to buy a slim hard drive. Before you dash to the market, take a look at your Xbox first. For Xbox 360 hard drive replacement, buy a compatible hard drive only.

Step 1: Once you have the external hard drive. Put your Xbox on the table. Do you remember my screw-saving trick? Yes, use that during the process.

Step 2: Xbox 360 hard drive is on its side. You will see a small button there. Press and lift to remove the hard drive.

Step 3: Flip the drive upside down and unscrew the back cover. You will need to go lightly or, it may break. Nice and easy, remove everything to reveal a metallic layer.

Step 4: Unscrew the screws here as well. Now you will see a fancy circuit. It is Xbox 360 slim hard drive that you need to replace.

Step 5: Push the hard drive slightly outward. Once out of place, remove its connector. You may need to lift it a little to remove the connector easily.

Congratulations! You are through with the difficult part of how to use a laptop hard drive in an Xbox 360 slim. It’s ready to go live once plugged.

How to Use a Laptop Hard Drive in an Xbox 360 Slim?- Using A USB HDD Docking Station:

Now I will tell you a cleaner way. If you are not much of a technician, you can use this method. First, let’s look at the things you will need.

If you are not buying anything to reuse your Xbox. Then there is a chance your laptop’s hard drive may not fit in the Xbox case.

Since you cannot directly plug in an HDD, you will need an extension. And that is an HDD USB docking station.

Step 1: Open up the USB enclosure. There may be screws or a simple snap-open case.

Step 2:  Inside the docking station, you’ll find only one cable. This cable has wires for both power and data.

Step 3: Fit in the laptop’s drive. After that, plug in the SATA cable.

Step 4: Screw in the hard drive using the given screws.

Step 5: Once the hard drive is secure, screw the outer cover of the docking station back.

USB enclosures are very versatile. You can plug the docking station and copy the game files or other media from your PC. Later you can plug it in your Xbox and enjoy your game.

To entirely use the new storage, use the first method on; how to use a laptop hard drive in an Xbox 360 slim.

So here we are at the final inches of our post on how to use a laptop hard drive in an Xbox 360 slim. We saw two easy ways of doing it without messing with the insides.

You can either use a docking station or directly replace the hard drive of the Xbox. But make sure to keep a backup and, for that, you can use a SATA transfer cable or a utility program.

Once your data is safe, you can replace the hard drive with any method that fits. Lastly, before leaving, slide in your opinions for us!

What type of hard drive does Xbox 360 use?

Which companies make the best hard drives to use in Xbox 360?

You can replace the hard drive of your Xbox with a Toshiba, Hitachi, or a hard drive from any renowned company. Do check out its reviews to ensure a good buy.

Can I insert my regular laptop hard drive into my Xbox?

The main thing is that Xbox 360 has SATA hard drives. And so will your laptop. But the only problem is the size. If you are directly putting it in your unit, ensure the size fits.

Will changing my Xbox drive remove all my data?

The replaced drive will not have your previous data. You should copy your data into the new hard drive before using it.

How can you use your previous data on the new drive in your Xbox?

Laptops idea is a participant "As an Amazon Associate, We earn from qualifying purchases ”, an affiliate advertising program designed to provide a means for sites to earn advertising fees by advertising and linking to Amazon.com

As an Amazon Associate, we earn from qualifying purchases.